Not long ago I took a 3 day rice fast (more like 3 1/2 days... but who's counting?). The rice fast is a common ritual here, where well-chewed grain is the heart of a macrobiotic diet. Some times for a day, some times for a week, ideally for 10 days, which is supposed to be the time it takes to fully cleanse the bloodstream. 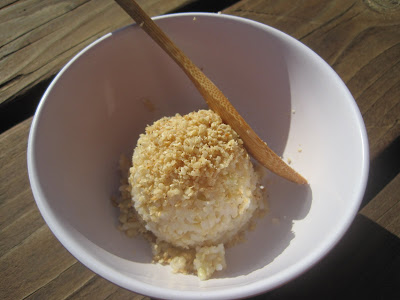 The photo above was the recommended bi-hourly meal on the fast we were undertaking: a scoop of brown rice with a bit of gamasio (a blend of ground toasted sesame seeds and sea salt). Some miso soup in the morning was also permitted, but the main event, as the name might suggest, was rice. The scoop above was divided into four bites, each of which was to be chewed 200 times. Chewing is an important practice in macrobiotics, both as an essential beginning to good digestion and as a means to heightening attentiveness to the food you're taking into your body, cultivating a habit of presence and awareness that hopefully spills out into the rest of your daily experience. Maybe it was a placebo effect, or maybe all the sugar released by chewing, but after 800 chews the first ball of rice left me feeling euphoric. 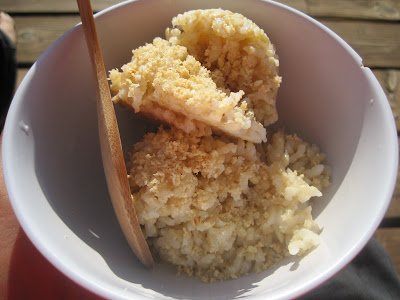 The rice fast invites a state of emptiness, but it shouldn't leave you hungry. So, feeling a bit weak and hungry after a couple of days on the single scoop meal, I modified to a two-scoop technique, which I found much more manageable. Day 4 I was feeling good again.

In addition to radically improving my chewing technique, and bringing new awareness to the practice of eating, the rice fast renewed and deepened my appreciation for the rich variety of tastes that I take for granted on a regular basis. It can be a great way to find new gratitude for the gift of eating, and to examine one's eating habits and one's relationship to food.